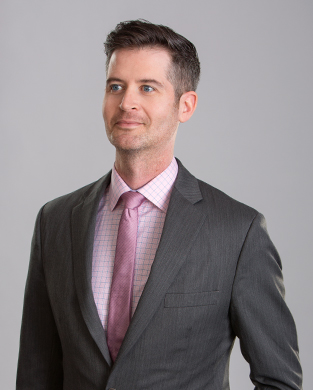 In 2012, Sean Carrie joined JSS Barristers as an associate; he is now counsel. Sean’s practice extends to all areas of civil litigation, with a primary focus on Class Proceedings and mass-tort claims.

He is especially interested in claims involving privacy/data security issues and those dealing with First Nations issues.

Sean was born in Calgary and grew up living in Calgary, Victoria and Hong Kong. He obtained his Bachelor of Arts degree, in political science, from McGill University in 2004. While pursuing his studies, Sean played an active role in student affairs, as an editor at the university newspaper, and served as Vice-Chair of the Board of Directors of Canadian University Press.

Following completion of his undergraduate studies, Sean worked at the National Post in Toronto. There - in addition to his editing, fact-checking and re-writing responsibilities - he wrote a daily column for publication in the Arts & Life section and contributed other articles to the publication on a regular basis.

In 2006, Sean returned to Calgary to attend law school at the University of Calgary, where he obtained his J.D. in 2009. In law school, he served as a clinical caseworker at Student Legal Assistance and as a contributing editor for the Alberta Law Review. Additionally, Sean participated in the mooting and debating programs, where he and his partner won the SLA Trial Competition for first-year law students. Sean received the faculty's Legal History prize in 2009.

Sean articled with the Toronto-based Association in Defence of the Wrongly Convicted (AIDWYC - Now Innocence Canada). After completing his articles in 2010, he was called as a member of the Law Society of Upper Canada and remained at AIDWYC as its first Case Management Counsel. In that role, he assisted in the review of claims of wrongful conviction arising from jurisdictions across Canada and the United States. He also assisted in complex criminal and constitutional litigation in the Superior Court of Ontario, the Ontario Court of Appeal, and the Supreme Court of Canada.

Sean enjoys gardening, running, reading, painting and birdwatching in his spare time. He continues to take interest in travel, especially in the developing world.