Gavin volunteers at the Faculty of Law at the University of Calgary, including with the mooting and debating program. Gavin has also served on various community boards, including Calgary Legal Guidance, the Resicare Society (Resicare provides community-based support for people with disabilities) and the Progressive Alternatives Society of Calgary (PASC seeks to provide independence, community inclusion and quality of life for people with disabilities). 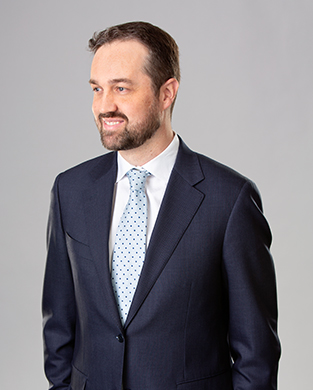 Upon graduation, Gavin clerked at the Court of Appeal and the Court of Queen's Bench of Alberta. Following his clerkship, Gavin completed his articles at the Calgary offices of a large national law firm, practicing in securities and regulatory matters. He was called to the Alberta Bar in 2002.

Gavin's practice focuses primarily on class actions. Additionally, he regularly represents clients on corporate and commercial litigation matters, as well as professional negligence claims. He has appeared before the Provincial Court of Alberta, the Court of Queen's Bench of Alberta, the Alberta Court of Appeal, IIROC and the Alberta Securities Commission.

"The Delay Rules in a World of Suspended Limitations"

"Class Actions Arising From a Pandemic"