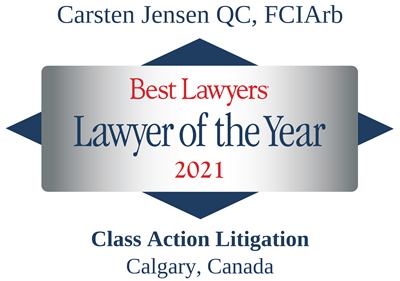 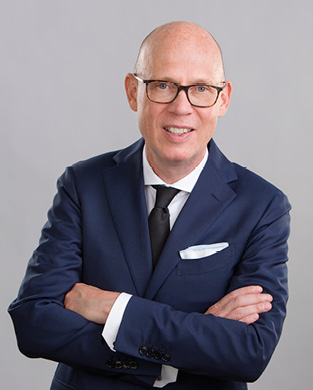 Carsten is a founding partner of JSS Barristers and a former managing partner of the firm. His practice focuses exclusively on dispute resolution, with an emphasis on corporate and commercial litigation including commercial class actions, oil and gas disputes, shareholder disputes, multi-party litigation and arbitrations. Carsten has represented governments, airlines, major and independent oil and gas firms, and individuals. He acts for the Alberta Lawyers Indemnity Association in defence of professional negligence claims and on insurance coverage issues.

Carsten is a former bencher (director) of the Law Society of Alberta, which is the governing body for lawyers in Alberta, and he served as President of the Law Society for a one-year term commencing February 2013. He was previously Chair of Finance, Chair of Credentials and Education, and for two years Chair of Conduct. Carsten previously served on the Advisory Board of ALIEX, which was the reciprocal insurer providing coverage to Alberta lawyers.

In 2018, Carsten was appointed by the Law Society of Alberta to be its representative to the Federation of Law Societies of Canada. Carsten serves as a member of the Canadian Bar Association National Class Actions Task Force, which was established to address the procedural challenges posed by multi-jurisdictional class proceedings.

Carsten is a member of the Canadian and Calgary Bar Association and has been accepted as a Fellow of the London-based Chartered Institute of Arbitrators (FCIArb). In 2018, Carsten was appointed as a member of the Professional Conduct Committee of the Chartered Institute of Arbitrators. In 1998, Carsten commenced a two-year leave of absence during which time he acted as senior legal officer and eventually team leader at the United Nations Compensation Commission (UNCC) in Geneva, Switzerland. The UNCC was established to process and resolve compensation claims arising from Iraq's invasion and occupation of Kuwait. During Carsten's first year with the UNCC, he worked on the Kuwait Oil Company claim for oil losses resulting from the Kuwait oil well fires. Carsten was responsible for overseeing the quantification of the amount of oil lost, with the assistance of reservoir engineering experts. This claim is possibly the largest single oil and gas loss ever resolved.

Subsequently, Carsten was responsible for overseeing development of a consistent method for resolving the thousands of individual business loss claims filed with the UNCC as a result of the war. The methodology which Carsten and his team developed was adopted by the UNCC panel responsible for these claims and has since been applied to thousands of similar claims. Carsten returned to JSS Barristers in the fall of 2000 to resume his civil litigation practice.

Carsten has a Martindale-Hubbell "AV Preeminent" peer review rating in both legal ability and ethical standards - the highest rating given. Carsten has repeatedly been recognized in the Canadian Legal Lexpert Directory as a leading practitioner in Corporate Commercial Litigation, Class Actions, and Medical Negligence. In addition, Carsten is recognized and listed in "Best Lawyers in Canada", and in Benchmark. Chambers Global lists Carsten as a Distinguished Practitioner in commercial litigation.

Carsten is highly experienced in arbitration matters, both as party counsel and as arbitrator.

Carsten has served as arbitrator in many commercial disputes as sole Arbitrator, as a Panel Member, and as Chair. He has experience with ad hoc and institutional arbitral proceedings, including ICC matters, in a range of commercial disputes (for example, international commercial transactions, construction and engineering faults, failures and delays, energy, environmental claims and commercial real estate).

Carsten is a Fellow of the London UK-based Chartered Institute of Arbitrators (FCIArb), and a Member of its Professional Conduct Committee (the PCC), which is concerned with the regulation of the professional conduct of Institute members and discipline matters.

Between 2006 and 2014, Carsten was a Bencher of the Law Society. In that capacity he has served as an adjudicator on disciplinary panels in over 25 matters, at least 10 of which he served as the Chair and followed by a written decision principally authored by Carsten. His written decisions are available by searching on the CanLii database.

Carsten has served on numerous other Law Society panels dealing with assurance fund claims, credentials and education matters and interim suspension applications. In those types of proceedings, he has served as both a panel member and as the Chair, and in numerous such cases has provided written reasons.

Carsten served two years as the Chair of Conduct at the Law Society, meaning that he was responsible for the overall disciplinary process, and for resolving interim motions regarding evidentiary disputes and scheduling matters. Some of those matters involved the preparation of written decisions.

Carsten continues to serve on the Law Society's roster of adjudicators and accepts occasional appointments to serve as a panel member on Law Society hearings. In addition, he serves as a member of the Appeal Committee of the Canadian Centre for Professional Legal Education (CPLED), dealing with academic appeals arising from the bar admission process.

Carsten has completed adjudication training related to credibility findings, jurisdiction, and decision writing, and has been appointed to Chair arbitral tribunals. Carsten is recognized by Benchmark as a Litigation Star in arbitration, and he is a member of the Western Canada Commercial Arbitration Society.

Carsten is presently available for arbitral appointments as sole arbitrator, as panel member, or as Chair.

ADR Perspectives, a publication of the ADR Institute of Canada - 2014
Author

"Energy in Canada - Litigation in an Emerging Energy Superpower"

Co-Chair
"Lawyer Competence - Reconciliation and Working with Indigenous Peoples; the Financial Arrangements Between Lawyers and Clients; and the Law Societies as Regulator - Developments in Self Regulation", CBA-FLSC Legal Ethics Symposium, 2022

Presenter
"Running Your First Trial - Steps Prior to Trial", presented at a LESA seminar in Calgary and Edmonton – 2015