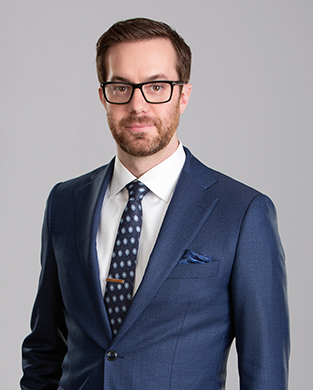 David Marshall joined JSS Barristers in 2016, having previously articled and worked as an Associate at a large national law firm, practicing in general civil litigation. David has represented clients before all levels of court in Alberta.

David continues to practice in most areas of civil litigation, including administrative, public and regulatory law, appeals, corporate and commercial litigation, defamation and communications, employment law, insurance and coverage disputes, professional negligence and discipling, and securities and shareholder litigation.

In 2022, David was recognized by Best Lawyers Canada in their 2023 list of Ones to Watch, awarded to associates for their outstanding professional excellence.

David obtained his J.D. from the University of Calgary in 2014. During his studies, David earned several awards and scholarships, including for highest standing in property law and advanced oil and gas law, and twice made the Dean's List. Additionally, David volunteered at Student Legal Assistance.

Prior to law school, David obtained a Diploma in Jazz Performance from Mount Royal University, here in Calgary. Following this education, David spent several years playing and teaching music in the Calgary area. Later, David obtained a Bachelor of Arts in Philosophy, with distinction, from the University of Calgary.

When not practicing law, David is spending time with his family, enjoying the local culinary scene, or golfing. On top of that, he is still involved in several ongoing musical endeavors. David is a proud Calgarian, his southern Albertan family roots stretching back more than 100 years. It should be noted that Davis is also a lifelong fan of the Calgary Flames, the local hockey team.