Kaila is an active volunteer with Calgary Legal Guidance, Pro Bono Law Alberta and the Women's Centre of Calgary. 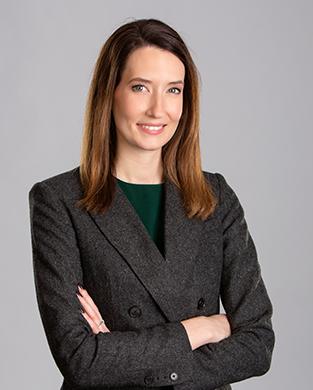 Kaila Eadie is an Associate at JSS Barristers. Her practice spans most areas of civil litigation, with a focus on corporate & commercial disputes, employment matters, professional negligence claims, and insolvency & restructuring. She has appeared before every level of the Alberta courts and has successfully represented clients at trial and on appeal.

Kaila joined JSS Barristers as an Articling Student in 2016 and was called to the Alberta Bar in 2017. In addition to regularly representing clients before both the Alberta Court of King’s Bench and Provincial Court, she acts for clients in domestic and international commercial arbitrations, and before administrative tribunals, including the Alberta Securities Commission and the Social Security Tribunal of Canada.

Kaila is skilled in file and document management in complex cases involving hundreds of thousands of documents. She has extensive experience using e-discovery technology to conduct analysis and deliver results on tight timelines.

Kaila obtained her JD from the University of Alberta, with distinction, in 2016. While in law school, Kaila worked as a research assistant for Professor Bruce Ziff, while also competing nationally in the University of Alberta's Competitive Moot Program. Kaila also worked as a summer student at the Edmonton Community Legal Centre, where she honed her advocacy skills by assisting clients with employment, landlord/tenant and social benefit issues at Provincial Court, as well as before administrative tribunals.

Prior to law school, Kaila obtained her Bachelor of Arts (Honours) from Queen's University in Kingston, Ontario. At Queen’s, Kaila was active in the arts community, where she sat on the Executive Committee for the Exposure Arts Festival and wrote and edited short films as part of the Queen's University Focus Film Festival.

Kaila is a member of the Law Society of Alberta, the Canadian Bar Association, the Advocates' Society and the International Women’s Insolvency & Restructuring Confederation. Further, she is an active volunteer with Calgary Legal Guidance, Pro Bono Law Alberta and the Women’s Centre of Calgary.

In her spare time, Kaila enjoys watercolour and acrylic painting, and spending time in the mountains.

JSSBarristers.ca, May 14, 2020
Co-Author (with Christa Nicholson)

"Are Contracts Enforceable Despite COVID-19? [Part 6]: The Principles of Causation"

JSSBarristers.ca, May 7, 2020
Co-Author (with Geoffrey Boddy)

Co-Presenter (with Christa Nicholson)
"SCC Redwater Decision - what you need to know", Wake Up with JSS Barristers - Speaker Series, March 7, 2019