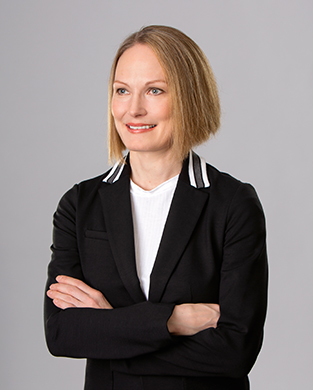 Laura Warner carries on a generalized practice in civil litigation, with a focus on appellate advocacy, complex commercial disputes, and the judicial review of government decisions.

As a member of the Ringette Canada Hall of Fame, Laura understands the value of honest communication and preparation, lessons that she has taken with her into her legal practice. Laura prizes clear strategy, confident decision-making, and tactics that focus on the best possible return on investment for clients. She understands the commercial realities that clients face and regularly meets or exceeds the expectations mutually agreed to with clients. Laura strives to tackle complex issues with efficiency and clarity.

In these complex disputes, Laura is called upon to analyze novel legal issues and distil them into persuasive, comprehensible arguments that the deciding tribunal can get behind. She also has extensive experience project managing these large files to ensure efficiency and good return on investment for the client.

Laura also leads the team of JSS Barristers lawyers who represent the Canadian Coalition for Firearms Rights and other applicants in a judicial review of the May 1, 2020, decision by the Federal Government to materially change its approach to firearm regulation. This complex case involves cutting edge legal issues related to the proper approach to reviewing executive government decisions.

Laura has also been involved in complex commercial litigation and arbitration. She is often involved in factually- and document-intensive disputes involving tens of millions of dollars, such as an arbitral dispute resolved through a one-week hearing with over $100 million at issue.

Laura was also part of the JSS team retained on short notice by National Oilwell Varco for a 3-and-a-half-month-long trial in 2017, involving claims totaling more than $90 million arising out of a corporate acquisition, including an indemnity claim for alleged breaches of representation in the governing Purchase and Sale Agreement.

She also played a senior role in an international arbitration arising out of a Production Sharing Agreement in an emerging economy. This complex dispute involved over $100 million and was resolved through a one-week hearing in Paris under the ICC Rules.

She is also playing a leading role in a complex commercial arbitration in the midstream market in Alberta. This dispute involves over $60 million and will be resolved through a multi-week hearing before an arbitral panel in 2022.

Laura has played a central role in representing the province in its litigation against Canadian, US, and British tobacco companies.

Laura graduated from the University of Alberta with a Bachelor of Arts, with distinction, in 2001 and an LLB in 2009. During law school, Laura volunteered with the civil branch of Student Legal Services. She consistently placed near the top of her class in law school and was the recipient of numerous scholarships and awards.

After graduating, Laura articled with the Court of Appeal in Edmonton, where she worked closely with the Justices and gained invaluable insight into effective advocacy. Following that experience, she welcomed the challenge of clerking to Justice Rosalie Silberman Abella at the Supreme Court of Canada in Ottawa. During her one-year clerkship, Laura had a bird's eye view of the inner workings of the country's highest court and honed her analytical skills, her legal research and writing, and her oral advocacy. These opportunities provided Laura with useful insights and strengths that she still exhibits within her legal practice.

Since 2019, Laura has been named Future Star by Benchmark Litigation, every year. Additionally, she was previously named Lawyer to Watch in Litigation: Corporate Commercial by Lexpert.

Between her undergraduate degree and law school, Laura worked for a renowned management consulting firm where she taught mental toughness training to elite athletes and corporate clients. Laura developed expertise teaching topics such as how to perform under pressure, how to recover quickly from disappointing setbacks, and how to communicate effectively with teammates and colleagues. In her own life, Laura practiced these skills while she competed for over 20 years as an elite athlete. She is a 2-time World Champion and 9-time National Champion in the sport of ringette and served as captain of the Canadian Ringette Team from 2002-2007. For these achievements, Laura has been inducted into the Ringette Canada Hall of Fame. Having previously co-owned, grown and sold the pre-eminent ringette training company in Canada, Laura also brings experience as an entrepreneur into her practice and within the firm.

Outside the practice of law, Laura enjoys being active, spending time with her family and volunteering as a ringette coach.

"The SCC Expands the Cause of Action for Constructive Taking"
JSSBarristers.ca, November 30, 2022
Co-author with Laura Warner

"Tort Liability in a COVID World, Part 2: The Case of Walmart"

"Commercial 'Evictions' Are Not Suspended"