University of Calgary, Bachelor of Laws

Robert has acted as Principal for four articling students who are current members of the Law Society of Alberta.

Robert is also active outside of the practice of law and frequently volunteers his time within the legal community, having taught advocacy on behalf of the Canadian Centre for Professional Legal Education to articling students taking the Bar Course and judged numerous debates and moots at the U of C Law School. Robert also has a long history of involvement in politics, including serving on the Executive Committee of the PC Canada Fund prior to the Conservative Party merger, acting as the lead organizer on five Annual Calgary Leader's Dinners and serving on the Provincial PC Finance Committee. Robert also headed numerous Leadership  Campaigns, including Chairing Alison Redford’s 2011 Provincial Leadership Campaign and the 2012 successful PC Provincial Election Campaign. 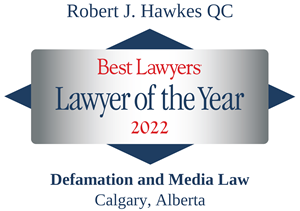 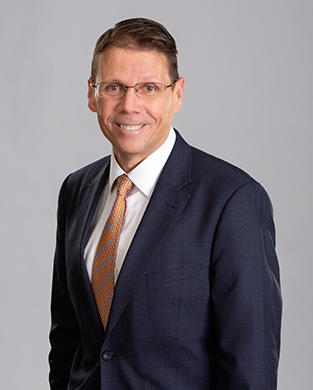 Robert J. Hawkes is a third-generation Calgarian. From 1983 through 1987, Robert studied philosophy at the University of Calgary and the University of Saskatchewan. In 1987, he went to work for the Government of Canada in a variety of capacities, including senior policy advisor and political advisor to the Minister of Finance.

Robert returned to Calgary and entered law school at the University of Calgary, where he obtained his LL.B. in 1993.

Robert has been lead counsel in complex class actions, corporate oppression actions, proxy fights, shareholder derivative actions and emergency injunction applications to freeze and discover assets and obtain investigation orders, asset tracing, fraudulent conveyances, and Bankruptcy Act orders which enable the victims of fraud to have their judgment survive the Defendant's bankruptcy. Robert is married, with two sons, and he enjoys spending time with his family and on politics, standup comedy, travel, soccer, poker, chess and hiking.

Robert blogs about life, law, politics and other topics at: https://calgaryrob.wordpress.com/author/calgaryrob/

At law school, Robert excelled in the debating and moot court program, winning the Blackstone Team Debates as well as the medal for the best Individual Debater in both first and second year. In his third year of law school Robert was picked to join the U of C's Philip C. Jessup International Law Moot Court Team, eventually placing as the 4th best individual oralist at the National Competition in Toronto. That same year he won the Neil V. Germaine Scholarship for academic merit and leadership ability, and he and his teammate won the law school's Client Interviewing and Counseling competition ultimately representing the U of C internationally in Portland, OR.

After law school, Robert was invited to article with the Alberta Court of Appeal. During his Court articles, Robert learned firsthand how judges assess the cases that come before them, which has proved invaluable in his practice. Robert completed his articles with Bennett Jones, one of Canada's leading national law firms, where he also worked as an associate until 2002 at which time he became a Partner in Bennett Jones’ litigation group. While practicing at Bennett Jones, Robert obtained experience in virtually all areas of corporate/commercial litigation.

In 2005, Robert joined JSS Barristers where he has continued his high level practice in commercial litigation with a particular emphasis on securities related litigation, including broker litigation and discipline hearings, corporate restructuring disputes, shareholder oppression, derivative and class actions and on corporate fraud and recovery from employees, sub-contractors, partners and corporate officers.

Robert also has extensive experience in oil and gas litigation and arbitrations, construction litigation, contract breach cases, First Nations governance, pension litigation and defamation actions, and he has represented clients in professional disciplinary matters before the Alberta Securities Commission, APEGGA, CREB and the Professional Conduct Committee of the Canadian Institute of Actuaries. He acts for a range of clients, from large corporations, pension funds and public institutions to individuals, small businesses and partnerships.

Interviewee
"After her toaster oven caught fire, Ontario woman was told by Whirlpool to take it up with a company in China", CBC, (https://www.cbc.ca/news/business/toaster-oven-fire-damage-whirlpool-1.5492611?fbclid=IwAR18RmnYZ2qUWQM90x4VSRwak8hsI5Cw2DVZ-kjHM6mTUXjog0Vd2vH3vig), May 28, 2020