University of Regina, Bachelor of Administration with Distinction

In 2019, Bryan was recognized for 25 years of volunteer service with Calgary Legal Guidance, which provides legal assistance and information to disadvantaged persons who would not otherwise have access to such services.

In his earlier life, Bryan used his second-degree black belt in Kempo karate to teach and train (and to put himself through law school by "bouncing" at Ye Olde Brunswick House in Toronto). Now, he enjoys travelling, hiking, reading, and snowshoeing.

Bryan is also an avid cyclist. He was a National Rider for the Sears National Kids Cancer Ride which saw him cycling as part of a team from Vancouver to Halifax in twelve days in June 2009 to raise awareness and funds for kids cancer. Bryan continues to cycle in support of this cause. Since 2009, he has travelled more kilometres annually on his cycle than in his car.

Who's Who Legal
Recommended
Arbitration Canada 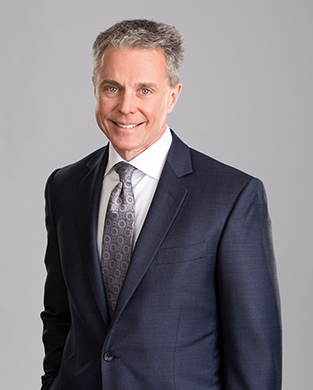 "His approach has been very effective. He is patient and plays a long-term strategy. "
- Client interview, Chambers & Partners

As counsel or as arbitrator, Bryan focuses exclusively on the resolution of corporate and commercial disputes.

As lead or sole counsel, he represents international and domestic corporations (commonly the largest and leading in their industries), but also privately-held start-ups and individuals.

In 2014, Bryan was appointed as Queen’s Counsel, and as a Fellow of the UK-based Chartered Institute of Arbitrators. In 2018, he was inducted as one of the maximum of twelve Alberta Fellows of the Construction Lawyers Society of America. In 2019, Bryan was appointed for a five-year term as one of three members of the Dispute Resolution Panel for the Ontario Independent Electricity System Operator. In 2020 and 2021, he was shortlisted by Benchmark Litigation as the Alberta Litigator of the Year. Bryan is also a member of the Western Canada Commercial Arbitration Society.

Bryan is recognized by Who’s Who Legal for "exceptional work in international arbitration proceedings" and as having "outstanding expertise in national and international commercial and civil litigation". He has been selected by his peers as one of The Best Lawyers in Canada in international arbitration and alternative dispute resolution, and for construction, corporate-commercial, and energy disputes. Benchmark recognizes Bryan as a Litigation Star in arbitral, commercial and energy disputes. Chambers Canada and Lexpert have identified Bryan as a leading lawyer who is repeatedly recommended for corporate-commercial disputes.

Bryan started his legal career by articling with a major international law firm, Blake, Cassels & Graydon LLP.  He was an associate for 5-½ years, and a partner for 10 years. Bryan then joined Jensen Shawa Solomon Duguid Hawkes LLP in 2009, serving as its Managing Partner from 2013 to 2014, and Firm Chairperson from 2015 to 2019.

Bryan has extensive experience as an advocate and advisor, including as arbitration counsel, trial lawyer and appellate counsel on high stakes and high profile matters before all levels of the courts of Alberta, arbitral panels, sole arbitrators, the Alberta Utilities Commission (AUC), and the Federal Court of Canada and has acted on both sides of applications for leave to the Supreme Court of Canada, including an early 2015 decision that he obtained on behalf of Shell Canada Limited, dismissing an application for leave to appeal.

Often, Bryan is retained on complex, factually- and document-intensive disputes involving at least tens of millions of dollars.

For instance, in 2016, Bryan was lead counsel representing TransCanada Energy Ltd. and ASTC Power Partnership in disputes related to the termination of Power Purchase Arrangements, including proceedings that have been described as undoubtedly "one of the more complex and high-profile judicial review proceedings" ever commenced in Alberta.

Also, Bryan was co-lead counsel for National Oilwell Varco, retained on short notice for a 3½-month long trial in 2017, involving claims totalling more than $90 million arising out of a corporate acquisition, including an indemnity claim for alleged premature revenue recognition in breach of the GAAP representation in the governing Purchase and Sale Agreement.

Generally, Bryan's approach to disputes is driven by his experience with numerous fast-tracked arbitral disputes and his strongly held beliefs in the importance and benefits of:

For experience as arbitration counsel or as arbitrator, see “Arbitrations” section below.

For more than 25 years Bryan has been focused on the resolution of business disputes. Over that time, the arbitral portion of his practice has increased progressively, such that it now comprises a high majority, involving complex matters typically with at least tens of millions of dollars at stake.

Bryan has obtained full-ranging experience as lead or sole counsel in arbitration proceedings and hearings in various industries, including Power Purchase Arrangement arbitrations in the Alberta electricity industry, construction disputes, and commercial disputes.

In 2005, he obtained a Certificate in Arbitration from the Alberta Arbitration and Mediation Society (now the ADR Institute of Alberta) (ADRIA), based on 11 different relevant courses including 62 hours in attendance and additional preparatory reading and other work.

In 2014, Bryan was admitted as a Fellow (FCIArb) of the worldwide London, UK-based Chartered Institute of Arbitrators.

Bryan has experience serving as an arbitrator or referee including:

Bryan successfully represented TransCanada Energy Ltd. and ASTC Power Partnership in obtaining a decision of the Chief Justice of the Court of Queen’s Bench of Alberta, appointing arbitrators and dismissing an application to stay arbitrations commenced in relation to the termination of Power Purchase Arrangements.

In addition, Bryan has the following related experience:

Bryan is recognized by Benchmark as a Litigation Star in arbitration, and by Who’s Who Legal as an expert in arbitration. He has been selected by his peers as one of The Best Lawyers in Canada in Alternative Dispute Resolution and Energy Law.

Examples of arbitral hearings in which Bryan has been lead counsel (of a team of colleagues from his firm) include:

Also, Bryan has been counsel on a number of matters related to the jurisdiction of arbitral tribunals including:

Bryan is currently available for arbitral appointments as sole arbitrator, panel member, or as Chair.

Bryan publishes and presents frequently on arbitral, power, international, construction, and oil and gas topics, and he has often appeared in the media through comments on judicial decisions.

"Respect for Arbitration: Do (and Should) Canadian Courts 'Stay' Out"

"Foreign Judgments: Don't They Mean What They Say?"

"Foreign Judgments: Don't They Mean What They Say?"

"Limitation means foreign arbitration order denied: Effect will not just be in Alberta"

"Publication by the MSA - "Inappropriate Conduct""

"The Revival of Forum Shopping for Limitations Deadlines"

"The Revival of Forum Shopping for Limitations Deadlines"

Blakes Bulletin on Litigation, May 2006
Author

This article first appeared in the 2006 edition of The International Comparative Legal Guide to: International Arbitration; published and reproduced with kind permission by Global Legal Group Ltd., London, pp. 79-85, 2006
Co-Author

"Corporate Conduct Gets a Failing Grade"

"What Makes Negligence 'Gross' and When is Misconduct 'Wilful'?"

Presenter
"International Enforceability of Judicial and Arbitral Decisions: Will Your International Agreement Be Worth the Paper It Is Written on?", Calgary Bar Association - International Business Section, Calgary, Alberta, February 2, 2010

Presenter
“Alternative Dispute Resolution: Should it Be Stipulated and, if so, Which Form and How?", Insight Information Conference, 2008 Negotiating and Drafting Major Business Agreements, Calgary, Alberta, January 29, 2008

Presenter
"Enforceability of Foreign Guarantees: Will Your Guarantee Be Worth the Paper it is Written On?", International Energy Credit Association, Calgary, Alberta, May 23, 2006

Presenter
"What Makes Negligence 'Gross' and When is Misconduct 'Wilful'?", Blakes National Securities Group Videoconference, May 16, 2006