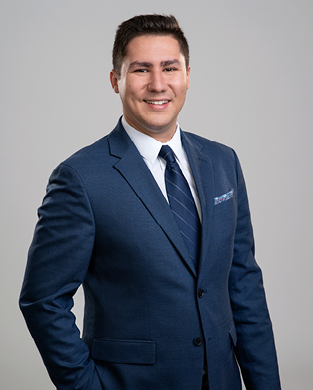 Prior to joining JSS Barristers as an Associate in 2021, Radu Pirvulescu articled and practiced at a boutique Calgary litigation firm. Radu has successfully represented clients before the Provincial Court and the Court of Queen’s Bench of Alberta. He also assists on applications to the Alberta Court of Appeal and to the Supreme Court of Canada.

After finishing his Bachelor of Business Administration, in management and international business at Mount Royal University, he obtained his Juris Doctor from Thompson Rivers University in British Columbia.

Prior to law school, Radu worked at the United States Consulate in Calgary. Involved primarily in the oil & gas and mining sectors, he aided the Consul General in cross-border diplomacy and trade development. Additionally, he spent time as a research analyst under the Chair of International Business at Mount Royal University, where he prepared reports on the Canadian textile industry that were presented to the United Nations Trade & Development Board.

Radu is a member of the Young Canadian Arbitration Practitioners and the Advocates’ Society. During law school, he won the Dean’s Course Prize in Advanced Advocacy and volunteered as a mentor to 1L students. Radu volunteered with the Court of Queen’s Bench Assistance (QB Amicus) program at the Calgary courthouse, improving access to justice for self-represented litigants. Whether it be in person or remotely, Radu looks forward to continuing to find ways to give back to the community.

Despite hailing from Romania, he has called Calgary home since his teenage years. In his free time, Radu enjoys travelling, playing tennis, reading, and spending time with friends and family. A trip to the mountains is never a question for Radu, as he heads out to enjoy the fresh air and trails whenever he has the opportunity.